From the 20th to the 22nd of September, in the Historical Village of Sortelha, pass the gates of the ‘Walls with History’, walk the streets of the village and go back in time until the reign of D. Fernando I, the Handsome,  the Inconstant (1367-1383).

The son of D. Pedro I and D. Constança Manuel, D. Fernando, inherited a stable and peaceful kingdom and thus had every chance of leading it without major difficulties, however, he eventually changed that stability by engaging in conflicts with neighbouring Castile (The Fernandina Wars). In addition to the warlike episodes, we highlight the “fruitful order to have the lands of the kingdom all mown and at use”, which will certainly have had repercussions in these most inhospitable lands of the kingdom.

The journey to medieval daily life will be complemented by historical recreations, a medieval market, an exhibition of siege machines and torture instruments, military and knight’s camp, crafts and experiences, falconry and farm animals, medieval rhythms, circus arts, on foot and on horseback based tournaments, medieval games and continuous animation.

All this considered, and because we consider that the success of an event also depends on the diversified representation of merchants, we have made available the respective Participation Rules, Registration Form and Complementary Documents. 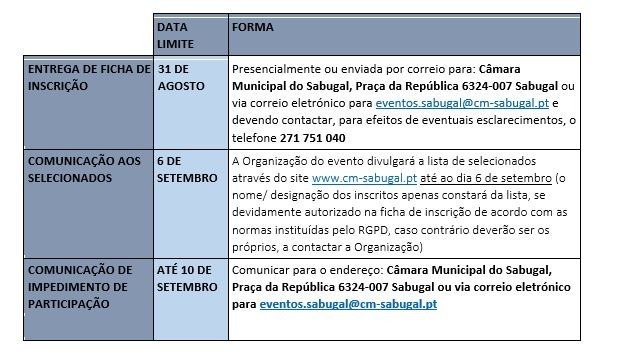 NOTE: Consultation of this summary table does not replace the full reading of the Participation Rules (exploitation of trade show spaces: merchants, artisans, craftsmen, mystics and taverns).

We count on you!

We use cookies to ensure that we give you the best experience on our website. If you continue to use this site we will assume that you are happy with it.Ok