Saturday, March 12th, the Municipal Auditorium hosted the 7th Associations Forum, dedicated to the theme “The Promotion and Animation of the Territory”

In the opening session, the city councilor Amadeu Neves highlighted that this event has been “asserting itself as a meeting point for Associations, in order to think, share, debate teh concerns, the projects and ideas of the Associations Movement”, adding still that in the Sabugal Municiapality “the movement has high expression in its numbers. There are many Associations, many initiatives and activities realized, many of excellent quality. And are these activities that bring life to the villages, that stimulate the few inhabitants that still resist, that atract the naturals to conviviality, but also outsiders.

The Associations, in the work they develop, “also promote and preserve the emotional bonds that justify the return of many that went away”, mentioned the councilor.

This is why, the Associations have been counting with the Municipality´s support, either isolated, as well within the Regulation for the Support of the Council´s Associations.

This way, the cooperation between the City Hall and the Associations constitutes a “true participative budget; meaning, the Associations propose their activities, present their projects, and, according to the viability, the City Hall supports the realizationof such proposals. A support that should motivate the Associations to improve their propositions, diversify, and seek broader publics”, he concluded. END_OF_DOCUMENT_TOKEN_TO_BE_REPLACED

During the afternoon, after a musical moment, the session continued with the interventions of Filipe Fernandes, Board Director of the Bendadense Philharmonic Society, that spoke of the Philharmonic Society and Bendada House of Music, and Domingos Malhadas, Vale de Espinho Parish Council President, that referred the 1st Côa Trail – From Spring to Dam, a joint organization by the Fóios, Vale de Espinho, Quadrazais and Malcata Parish Councils, that counted with the cooperation of the local associations. Followed the comunications of Hugo Jóia, general-secretary of the Forest Forum, about the “Sabugal + Valor”, and finally Dulcineia Moura, coordinator of the Côa Territories – Regional Development Association, that went over the theme “the associations in the territorial promotion dynamics”.

In the end, souvenirs were handed to every entity present and participant of the Carnaval Parade, and was also conducted the 14th Inter Parishes Futsal Tournament draw. 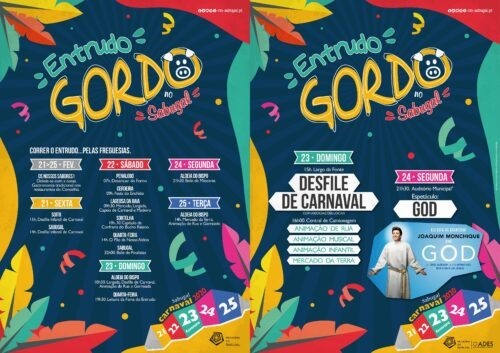